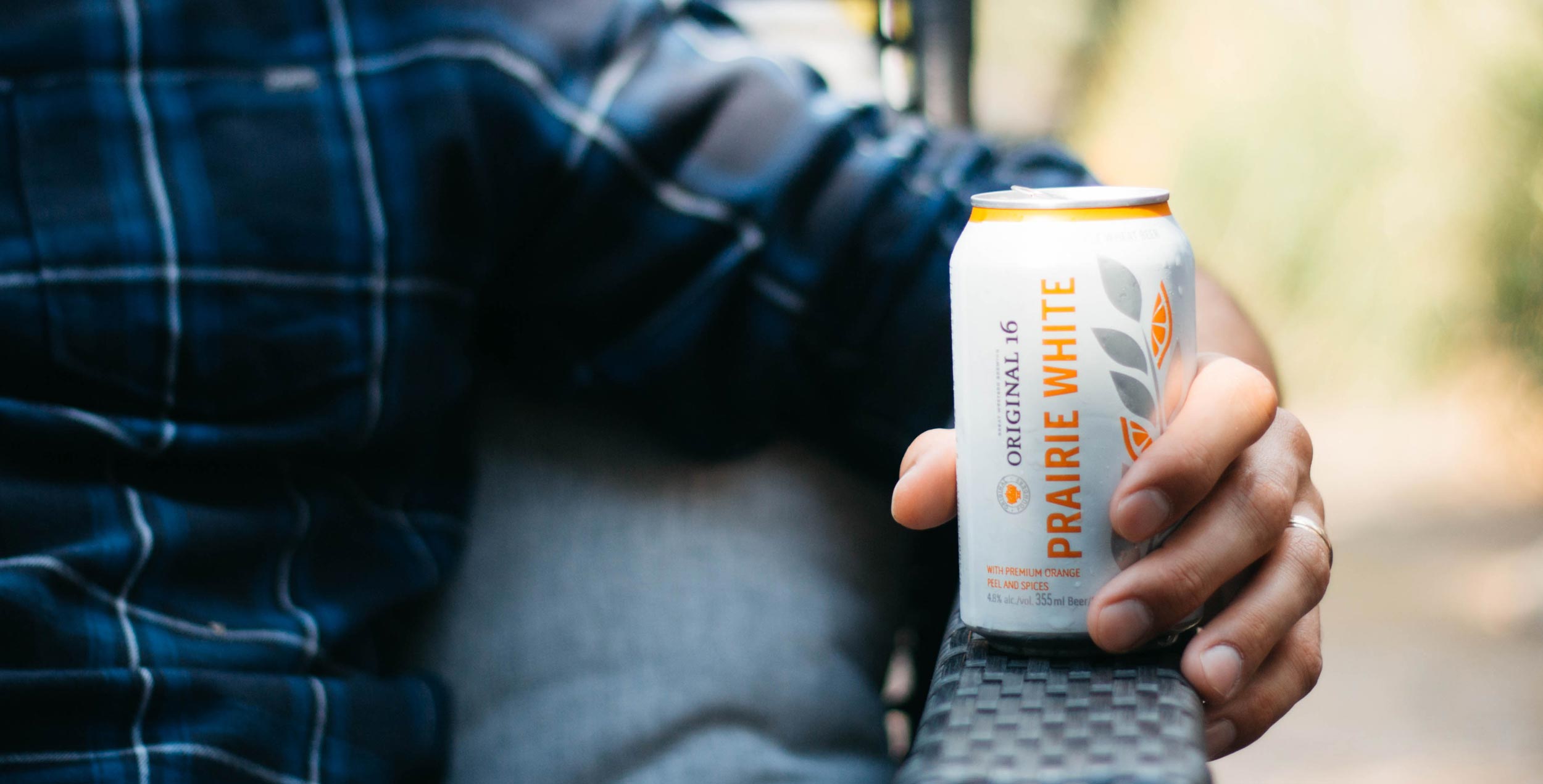 Until now, an unfiltered wheat beer had been deemed impossible to create in the Great Western brewery. And, Original 16 had already released two filtered wheat beers that didn’t reach the success they hoped for.

Why did this new wheat beer meet with such strong success? Had Saskatchewan suddenly gone wild for wheat beer?

We have been working with Original 16 and Great Western for the past 4 years, and this project was our first opportunity to bring a product to market, from the beginning. It was also a chance for us to evolve the look for a strong Saskatchewan brand.

Original 16 is well-known and loved for their two main premium beers: the Canadian Pale Ale and the Canadian Copper Ale.

In 2014, Great Western wanted to tap into a new segment—the wheat beer segment. Original 16 introduced their first German-style wheat beer—Krystall Wheat. As the name suggests, the Krystall beer was a filtered, clear wheat beer—brewed in the German Kristallweizen style.

Though it was, by definition, a wheat beer (and even the gold medal winner of the 2015 Canadian Brewing Awards’ wheat beer category)—Customers weren’t connecting with the Krystall Wheat. The name was then changed to Prairie Wheat in an effort to better connect with customers, but that wasn’t the answer.

Consumers voiced that they expected a Belgian-style, orange and cloudy beer when they ordered a wheat beer. This unfiltered Belgian-style beer was common in the market.

Original 16’s new Master Brewer walked on the scene in 2017. Much to everyone's delight, Amanda saw no issue in brewing an unfiltered beer in the Original 16 brewery.

Our design team, led by art directors Gillian Meyer and Scott Hysuick, was tasked with developing the look and feel of this new Prairie White.

Scott really wanted to make an impact. “I wanted to make it more contemporary—make it stand out from the traditional Original 16 packaging, so people knew that it was a new beer and not a re-package of the Prairie Wheat.”

“They wanted to see subtle changes, and they wanted to go all the way to something drastically different to really set it apart,” said Hysuick.

Our team explored a full range of design concepts — from using oranges and blues for a little pop of colour to Original 16’s classic neutral/metallic tones, to flooding the can completely with blue, silver or orange.

“They wanted to see a whole range of ideas,” said lead designer Gillian Meyer. “They started from being completely in line with Original 16— where Pale and Copper were—and then wanted to see design ideas that went all the way to ‘Crazy Uncle Eddy.’ That was our sandbox to play in.”

"They liked the idea of using a wheat sheaf,” said Hysuick. The previous Prairie Wheat featured a small wheat sheaf on a can modeled after the design of the Copper and Pale. “As we developed a new look, the wheat sheaf became a little bit more expressive.”

They started to play around with the wheat sheaf design and made it a prominent graphic on the can. Then, they evolved it by adding orange slices to the wheat sheaf.

“We did a whole bunch of variations on incorporating orange slices and orange colour,” said Meyer. “We then combined the two with the help of an in-house illustrator to create the final graphic with the slices.”

Though the use of graphics and a pop of colour brought a new look to an Original 16 product, our team ensured that the design fit perfectly within their product family.

“All of the brand elements are there,” said Meyer. “I would say it’s a slight departure from the Copper and Pale Ale, but we didn't want to lose the equity of Original 16—the equity that they've built up in the brand.”

Mark Watson, Vice President of Marketing, found the use of the colour orange, and the orange slices to be an important aspect to incorporate into the design, because fresh citrus is a core ingredient in a Belgian-style wheat beer, and this beer needed to stand out as a different, new varietal.

“I really like the use of our horizontal treatment of the Original 16 logo,” said Watson. “It's different. We usually stack it vertically, but this works really well with the design.”

The tap handle is critical for this segment, as Mark explains, “About 2/3 of all the wheat beer that's sold is sold at a bar— which is very different than many other types of beer.”

“It's a play on the graphic on the can,” said Hysuick. “We wanted the design to not only be visible from the bartender's side, but obviously you want the patrons to be able to see the designs as well. A lot of times, when you go to a bar and are trying to look at what's on tap, you're looking at the tap handles. You want it to stand out.”

We incorporated the wheat sheaf and orange slices onto the new tap handle so it could connect back to both the brand and the can.

We finished our design work in December 2017. The Prairie White was released the following month.

“Most people are saying they find it more contemporary,” said Watson. “It's simple. It's kind of like ‘Original 16, 2018 —You've taken it forward, but you haven't walked away from your past. You've graduated. You've evolved.’”

The customer response from the Prairie White has been overwhelmingly positive.

A recent reporting of Saskatchewan’s Total Wheat Volume by Brand (August 2018 YTD) found the Prairie White holding the highest share at 47% of the wheat beer market share in the province.

The Prairie White’s draft share is now at 28% of the Saskatchewan market, and is top of the province with a 64% share of retail sales.

“We brew beers that have scale and what we see as sustainable segments for a long period of time,” said Watson. “I see this as another strong extension from Original 16.”

Between a mix of Great Western’s careful listening and response to their customers, innovative brewing, analysis of the segment, and moving the brand forward — the Prairie White is set up to be a solid mainstay varietal for the Original 16 brand.

In May, SGI launched their newest campaign, High Driving, in conjunction with the introduction of new laws around marijuana.  The campaign aims…

Phoenix has played a key role in our success by creating a powerful connection with our fans.